The city of Savona is located on the Ligurian Riviera, near the outfall of the Letimbro and Quiliano. The municipality also includes the hamlets and localities of Bosco delle Ninfe, Ciantagalletto, Ciatti, Cimavalle, Conca Verde, Galleria Ranco, Church of the Madonna del Monte, Marmorassi, Maschio, Montemoro, Naso di Gatto, San Bartolomeo al Bosco, San Bernardo in Valle , Sanctuary and Strà.

What to visit in Savona

The Leon Pancaldo Tower or  Quarda Tower, commonly called “Torretta”, is a medieval tower located on the port of Savona, at the entrance to the central Via Paleocapa, and is considered the symbol of the city.

In ancient times the Leon Pancaldo Tower was called Torre della Quarda, and is mentioned for the first time in a document of 1392 as being part of the walls protecting the city, in a strategic position for the defense of both the adjacent Quarda gate and the port.

After the destruction of the walls by the Genoese in 1527 the tower remained isolated and in the following centuries it underwent a series of reconstructions. In particular, the entrance side was walled up and the inside of the tower was divided into various floors. The tower, like the square where it stands, is now dedicated to Leon Pancaldo, the Savona navigator who accompanied Ferdinando Magellano during his first circumnavigation around the world. 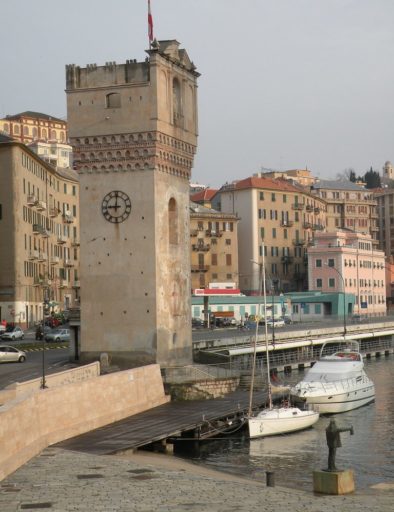 The Priamar fortress of Savona is an imposing military complex that dominates the city center at the port.

Built between 1542 and 1544 by the Genoese as part of the interventions aimed at the definitive subjugation of the city of Savona by the “Superba”, and extended several times, it takes its name from the hill immediately overlooking the sea on which it stands, where the finds of the first inhabited settlements date back to the Bronze Age. According to some scholars, the name could derive from pria a ‘mà (stone on the sea in the Ligurian language), or from pria mala (bad stone, i.e. brittle).

It is the most important fortification in the whole of western Liguria. After decades of neglect, it has been restored and is currently home to various cultural activities. 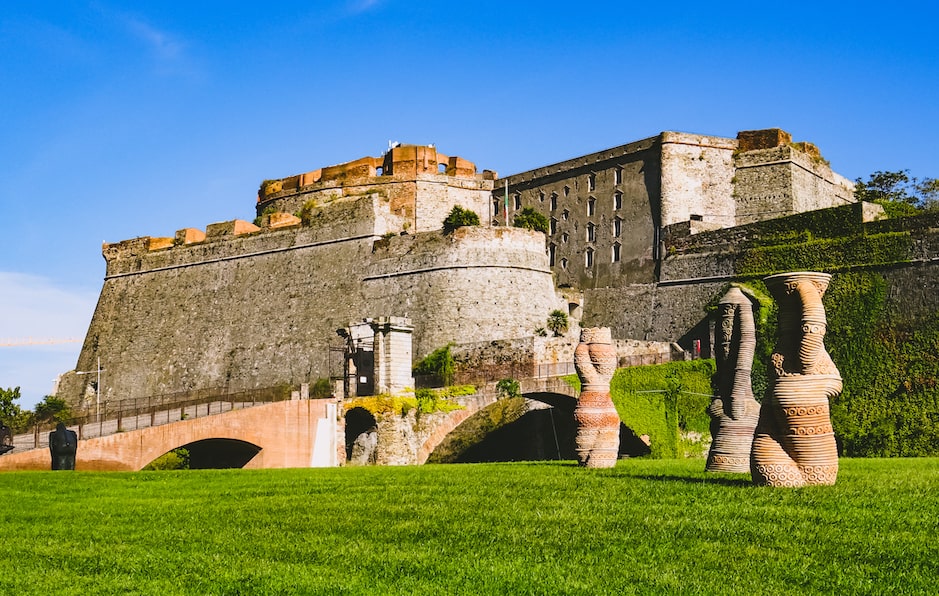 The Basilica of Our Lady of the Assumption is the main place of Catholic worship in Savona, the mother church of the diocese of Savona-Noli. It is located in the heart of the historic city center, not far from the Sistine Chapel.

In 1528 Savona had surrendered to the Genoese troops who had conquered the city and occupied the oldest part of the town on the Priamar hill.

In the years immediately following, the Genoese built an imposing fortress on this site, systematically demolishing all the ancient buildings including the 9th century cathedral, first deconsecrated and then definitively destroyed in 1595.

For these reasons in 1559 Pope Paul IV erected the church of San Francesco as a cathedral, whose cloister still exists on the left side of the current cathedral.

In 1584 the construction of the present building began, on the previous church of the convent of San Francesco, completed in 1605. In June 1816 it was elevated to the rank of minor basilica. 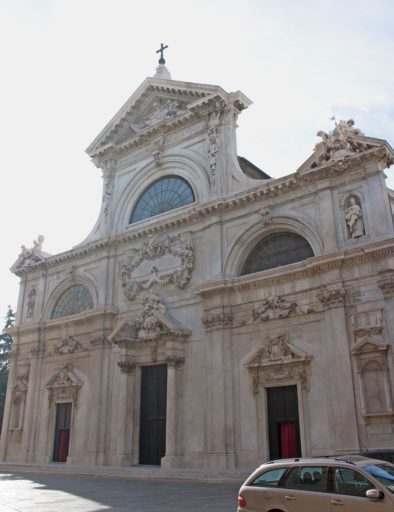 The Sistine Chapel of Savona

The Sistine Chapel of Savona is a Catholic place of worship adjacent to the Cathedral of Our Lady of the Assumption which is located in front of Palazzo Della Rovere.

It was built at the behest of Pope Sixtus IV between 1481 and 1483 as a mausoleum to house the tombs of his parents, Leonardo della Rovere and Luchina Monteleoni, both from Savona.

Francesco Maria Della Rovere (Genoa, 1695-1768), the last descendant of the Ligurian branch of the noble family, ordered its renovation between 1762 and 1764.

The interior was covered with stuccos and paintings by Brusco and Tagliafichi. Only the tomb of Pope Sixtus IV’s parents, sculpted between 1482 and 1483 by the D’Aria brothers, remained unaltered. 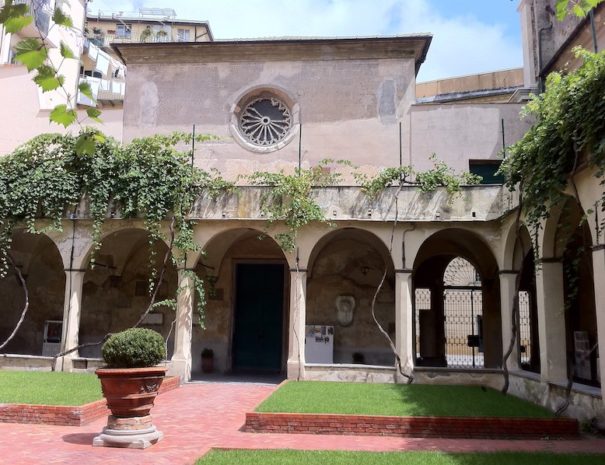 The Architecture of the Sistine Chapel of Savona

The main facade of the chapel is in a sober Gothic style and overlooks the cloister of the convent of San Francesco. In the center of it, above the portico that surrounds the courtyard, a small circular rose window opens. The right side, on the other hand, is entirely frescoed with the trompe l’œil technique, with fake architectures.

The interior of the chapel has a single rectangular nave with a ribbed vault and a square apse covered by a dome which only has a drum on the outside. Originally, the church was entirely decorated with frescoes made by Mazone in 1489. Few traces of these frescoes remain visible behind the altar and on the drum of the dome. Actuele style is Rococo, with rich stucco work and brightly colored frescoes. 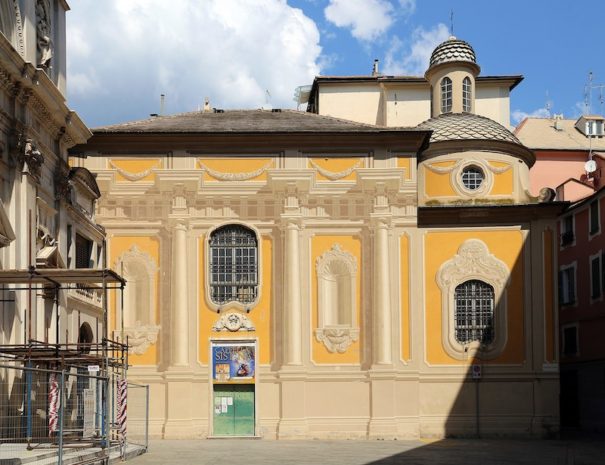 The pipe organ of the Sistine Chapel of Savona

On the choir in the counter-façade, there is the pipe organ, a valuable work by the Genoese Filippo Piccaluga and his son Felice Piccaluga dating back to 1764, restored by M ° Graziano Interbartolo in 2008.

The instrument is enclosed within a richly decorated wooden case closed by painted doors. The exhibition consists of three main rods cusps, each in its own field and made up of 9 rods.

The transmission is fully mechanical suspended and the console is a window, with a single keyboard of 45 notes with first octave scavezza and pedalboard with a 9-note scavezza lectern without its own registers and constantly combined with the manual. 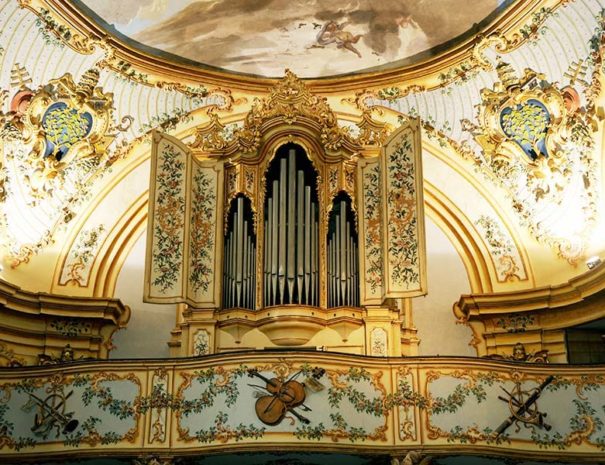